The Sabres had a similar offseason plan last year, they stacked up some solid defensive pieces, acquired two forwards and hoped for a better season, yet they fell short by a long shot ranking 31st in the NHL with 25 wins and 62 points.

The Sabres have this sort of persona to them that people know they can be a legitimate team but it seems like year in and year out they deal with injuries or have some issue. Last year it was Robin Lehner not rising to the occasion, Zach Bogosian missing 64 games, Ramus Ristolainen missing a few games, Jack Eichel missing 15 games, players like James Pominville falling short, Kyle Okposo still not rising to the occasion. Well this year, it seems a bit different for Buffalo they have players to replace those struggling veterans on their team now and a pretty solid line one and top nine also.

Sabres offense has high expectations with all the talent added… 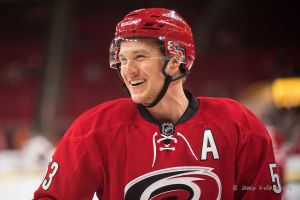 With the addition of now Jeff Skinner, who will more than likely play along Jack Eichel and Sam Reinhart, this could finally be the year, Eichel does not fall apart mentally and actually has someone to look forward to playing with. This could be Eichel’s 30-goal season we’ve all been waiting for! Skinner will bring a ton of speed and be a great line mate for Eichel, he has scored 30+ in his career three times and 20+ three times so he can surely put the puck in the back of the net. Also with Connor Sheary, it may help bump Okposo down or give him something to play for, with a line two looking like rookie sensation Casey Mittlestadt, Connor Sheary and Kyle Okposo the Sabres have another scoring line. With a third line of Patrick Berglund, Evan Rodrigues/Vladimir Sobotka and James Pominville there is a ton of moving pieces in this line up something the Sabres never had.

Carter Hutton will have his hands full… is he ready?

A lot of the pressure will be on the offense to produce but the Sabres will need a full and healthy season out of Zach Bogosian, Rasmus Ristolainen and Marco Scandella, these three combined last year for 63 points. Hopefully the addition of Swedish star Rasmus Dahlin will really push this defense in a new direction. A lot will come on the shoulders of Carter Hutton though, the Sabres newly acquired goaltender will have high expectations heading into this year. With the addition of Mittlestadt, Dahlin and Skinner the Sabres are hoping for a MUCH better season than last. Hutton will have his hands full next season with an easy 50 plus starts coming his way. After a 26 start season Hutton will be looking at a lot more work in Buffalo, to say the goalie cannot do it is one thing but we have to assume Hutton may not be the goaltender many are expecting him to be.

If Ottawa continues down this direction and Montreal does not get any better the Sabres could possibly make a 6th maybe even 5th place finish for the year. I could easily see the Sabres with 75 points, a couple of games under .500. The playoffs may not be in reach yet due to Toronto, Boston and Tampa Bay still being much better than Buffalo but things are on the up let’s say this, Buffalo will make the playoffs by 2020.