With injuries to five players including All-Stars Kyrie Irving, Gordon Hayward and Al Horford the Boston Celtics managed to overcome Anthony Davis’s 41-point performance and beat the New Orleans Pelicans 113-100. This win marks Boston’s sixth consecutive victory and their doing it while averaging over 120 points per game throughout the streak.

Tatum and Morris Fill the Stat Sheet for Boston

With an injured Kyrie Irving sitting on the sideline Jayson Tatum and Marcus Morris made sure to fill in the void left with the absence of Uncle Drew. Irving leads the team in scoring averaging 22 points per game. Tatum scored 21 points in 33 minutes, while Morris led the team with 31 points. Off the bench Jaylen Brown and Semi Ojeleye combined for 30 points to spark the second unit.

Rookie Robert Williams had an impressive game in his 26 minutes of action scoring seven points, grabbed 11 rebounds and three blocks, one of the blocks was against Davis when he swatted away his hook shot in the paint. Head coach Brad Stevens praised the rookie’s performance last night, “When you’re shooting jumpers and Robert’s in the vicinity, you feel him. When you’re shooting around the rim and he’s in the vicinity, you feel him,” Stevens said.

41-points from a Future Boston Player?

It’s been the topic of discussion since the start of the summer and that’s whether or not the Pelicans will finally make Anthony Davis available in trade talk. The Boston Celtics happens to be the riches team in terms of trade assets and the only team that can make New Orleans an interesting offer for the All-NBA player. 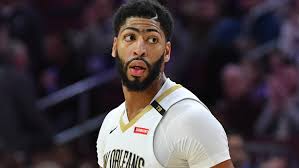 Even before the start of the season New Orleans head coach Alvin Gentry continued to support his claim that Davis is untouchable when it comes to trade talks, “We wouldn’t trade him for anyone. Even Beyonce. I think that makes him untouchable,” Gentry said.

Although all the Celtics can do is hope Davis continues to play for New Orleans until July 2019 and that is because of the “Rose Rule” contract extension both Davis and Irving signed, Irving while under contract with the Cavaliers.

The “Rose Rule” allows certain players coming off their rookie-scale contracts to earn 30 percent of the salary cap as opposed to 25 percent. To be eligible, a play must have achieved one of three accolades during the first four season of his career, MVP award, Defensive Player of the Year award or two All-NBA selections. When both Irving and Davis inked their extensions in 2015 and 2014, respectively, two All-Star starter nods was in place of DPOY.

NBA teams cannot trade for more than one player who has signed an extension under the “Rose Rule.” The Celtics acquired Irving via trade in August 2017, so they cannot deal for Davis, or any other player in fact that signed that extension. The only way Boston can trade for Davis is if Irving is traded or signs a new contract over the summer, which he can only do on July 1, 2019 the earliest.