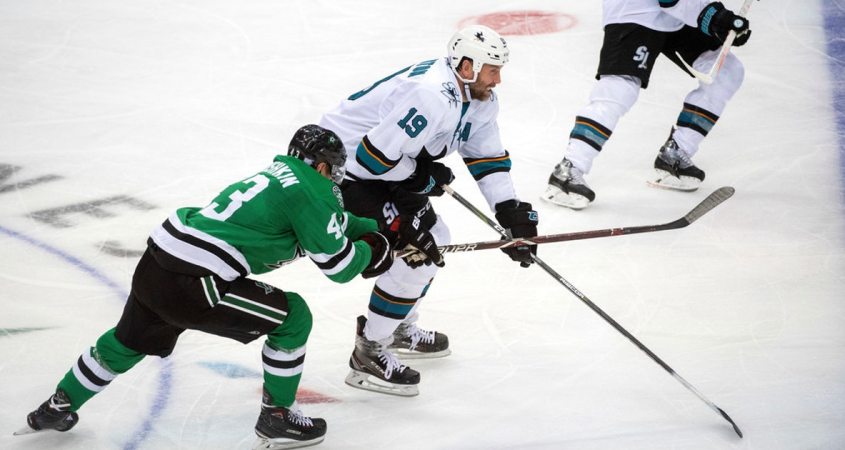 These two teams are neck and neck in terms of records. Luckily they fall in different divisions. The Stars are fourth in their division the Sharks are third. The Sharks come into this game on a two-game win streak but 4-4-2 in their last ten. As the Stars are on a three-game win streak and 6-3-1 in their last ten. It will be tough for San Jose to knock off Dallas at home where the Stars are 9-3-1 and San Jose is 5-7-3 on the road. We can probably expect very few or no power play goals from either team, as both teams penalty kills are top-5 kills and both teams average around 8.5 penalty minutes a game. As well the Stars defend very well allowing 2.57 goals against (2nd) and the Sharks should be better on the back end but do allow 3.03 a league average. The Sharks score a bit more 3.1 as the Stars only score 2.79 goals per game. The Stars struggle a tad with throwing pucks to the net if they can just shovel shots on net it will make this game easier for them. The Stars Ben Bishop and Sharks Martin Jones get the nod tonight. Both goalies are solid goaltenders so I don’t think we see a 4-3 or higher game. This game has 3-2 or 2-1 written all over it. With the Stars +120 and Sharks -140 it would draw a lot of people to go after the Stars, and it makes sense because I am doing the same. Stars for this one here.

I don’t think St. Louis has any shot really you can throw everything and the kitchen sink at this Winnipeg team they still won’t lose to St. Louis tonight. The Jets are at home, on a four-game winning streak, 6-3-1 in their last ten and 9-3-2 at home. The Blues are struggling greatly all year, on a two-game skid, 3-6-1 in their last ten and 3-6-2 on the road. The Blues allow 3.35 goals against vs a Jets offense that scores 3.44 goals per game calls for disaster. This game has potential to be a 5-2 game in Winnipeg’s favor. There is not really much to look at for this game. Especially with Jake Allen going for the Blues his 3.16 goals against does not look good vs Winnipeg plus this is the perfect game for Connor Hellebuyck to get some confidence going. The Jets are -225 and -1.5 puck spread that is +135, I would probably go puck spread here for Winnipeg.

The Wild’s Canadian swing ends tonight, they are 1-1 in their two Canadian games, they picked up their first loss 2-0 vs Calgary Thursday night and now they go back to back vs Edmonton. The Wild are 4-6-0 in their last ten and 7-7 on the road, they are struggling right now and have slowly fallen out of that Central division race. They will not be shutout once again on back to back nights but Mikko Koskinen in for Edmonton is a concern. The young goaltender has rode Cam Talbot out of net and he has done an unreal job this year. The Wild did play Alex Stalock Thursday night so Devan Dubnyk draws in the net for tonight. The Wild play a pretty quick game, transition well and try to use all four lines as effectively as possible. They score a decent amount and defend well same goes for Edmonton. The Oilers come into tonight off a win, 5-4-1 in their last ten and 7-4-1 at home. The Wild go home to stop bleeding hopefully after this, but they need a win and a big one. The Wild go home to Montreal, Calgary, Florida and San Jose not easy opponents. There is not puck spread out right now but the Wild are just +100 and the Oilers are -120. I like the Wild here tonight in a big game for Dubnyk and Wild’s offense.

Both teams are playing the opposite of each other right now. The Ducks are on a five-game win streak and Carolina a four-game losing streak. The Hurricanes go with Curtis Mcelhinney tonight and Ducks go with John Gibson. The Ducks are 7-1-2 in their last ten and 8-3-5 at home as the Hurricanes are 5-4-1 in their last ten and 5-7-1 on the road. Both teams score 2.4 goals per game and both teams allow 2.7 goals per game. The Ducks are just a better team right now, Canes are struggling on the road and I cannot seem them coming into tonight getting a win. I could see an overtime game honestly but the Ducks will come out with this one. The money line is Ducks -120 and Canes +100 the puck spread is Canes -1.5 (+245) and Ducks -1.5 (-300) I honestly can see the Canes keeping it to a one/two goal game. But Ducks for the win, maybe Canes for the puck spread…