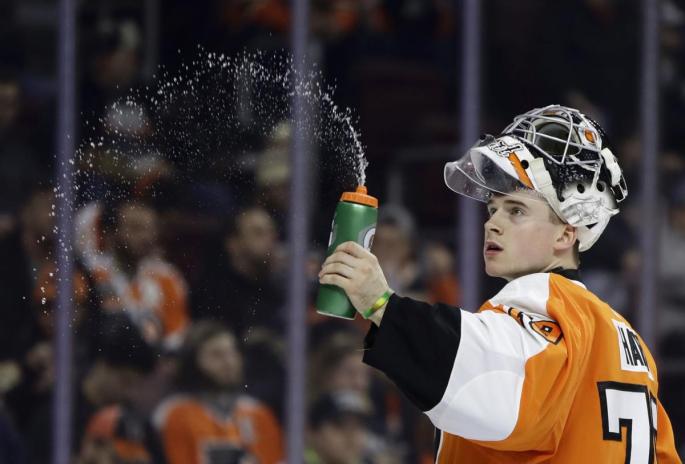 It was another rough game for Carter Hart and the Philadelphia Flyers. The Flyers lost 5-1 to Montreal Thursday night and lost to 5-2 to Tampa Bay. Granted these are two good Atlantic division teams but still back to back games allowing five goals and Hart getting pulled is not good.

Is there concern from Flyer fans? Probably they are notoriously known as the most knee-jerk reaction fans of them all. Either way the Flyers need to pump the brakes on Hart a little they have been over-using him thus far and it is starting to catch up to him. Yes, he is a very good goalie and has a bright future but they need to be smart with him now. He is young with a ton of potential there is no need he should be trying to make a playoff push for the Flyers. Realistically (and I know most Flyers fans aren’t) if Flyers do SQUEAK into the playoffs they are going to be bounced in the first round.

Since being called up in December 18th Hart has played in 22 games. Of the Flyers 30 games played since December 18th, Hart has started in 22 of them. That is way to heavy of a work load for a young, first-time goaltender. Now that Hart has been pulled in back to back games and has only lasted 10-minutes in both games, allowing some pretty soft goals needs to take a break, sit down, watch some game film, practice and continue to work on his weak areas instead of being thrown into the fire right now expecting to propel the Flyers into a playoff position.

If the Flyers continue to overuse Hart this could be detrimental to his mental toughness/mental health. Hart needs to take a break, watch Cam Talbot/Brian Elliott and slowly get back into the crease. The Flyers have Pittsburgh, Columbus and Buffalo to finish the month. If he starts one of those games I’d be surprised. 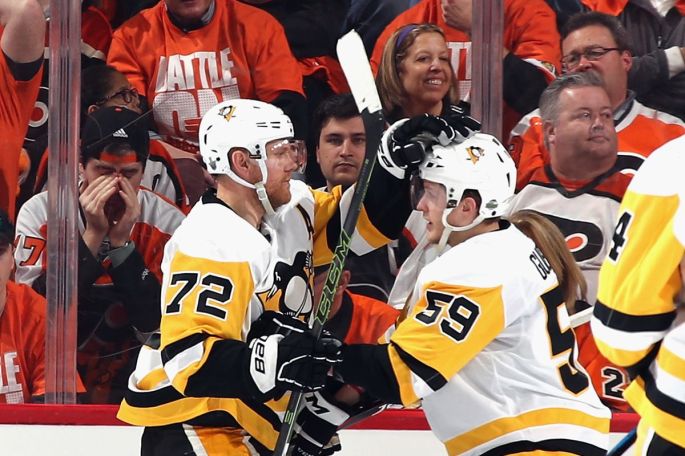 This game seemed to be an overtime type game, anything could happen. Tie game going into the third period, and just like that 30 seconds in the Penguins win the game and move onto face either the Capitals or Blue Jackets. Here is a little breakdown though. The game started with a Sean Couturier goal early in the first, immediately answered by Sidney Crosby and Carl Hagelin back to back to give the Penguins a 2-1 lead. Late in the first, Andrew MacDonald blows one by Matt Murray to tie the game at two heading into the first. Quick off-topic note, the Flyers Sean Couturier played the whole game with a torn MCL, which he suffered during practice after game two. He not only had the first goal of this game but he added two later in the game and ended the night with 5 points. On a torn MCL. Anyways, the second would start the same way a goal by Couturier off a beautiful breakaway goal to give the Flyers the lead and some hope. 12 minutes later Sean Laughton scored to make it 4-2 and what seemed like a Flyers win heading into the third. Patrick Hornqvist and Jake Guentzel added two late third period goals to tie the game four. Guentzel finished the night with 4 goals and 1 assist, first 5-point game for the playoff wonder. From the drop of the puck, the third was all Penguins as they scored three goals within 12 minutes to make it 7-4. The sixth goal came off a controversy trip call that led to a Penguins goal. But if you watch the playback, Couturier definitely embellished the play a little bit and jumped to make it seem way worse. Immediately fans started screaming “refs you suck” and after the game, I saw a tweet saying “refs miss blatant trip call, Pens go up 6-4.” Blatantly not a trip, sure, relax people it was not even close to a trip. Either way, they were losing this game. The Flyers would chip in one more to finish Couturiers hat trick late in the third but would not be able to sustain any more pressure. The Penguins close out the series with an 8-5 win and end it in six games for the series win. The Penguins 12th straight series win. Now they rest and wait for Columbus and Washington to kill each other.

After an eventful game five and Andrew Hammond stealing the show in Nashville, the Avalanche forced a game six and headed back to Colorado for hopefully a game seven. Well, it was clear the Predators had other plans as they blanked the Avs 5-0 and shut all headlines for the day down. As Andrew Hammond looked a bit shaky and the Predators dominated from start to finish. The game started with a Mattias Ekholm snapshot from Colton Sissons pass 7 minutes in and 4 minutes later the Predators added another one off Auston Watson’s stick for his fourth of the playoffs and a Preds 2-0 lead. From there on it was all Predators as they scored two more in the second and one in the third. They outshot the Avs 37 to 22 and one thing we have not seen all playoffs was a team take no penalties in which the Predators did here and it worked out for them for sure. This game did start to get a little chippy after the whistles later in the third as Colorado was clearly frustrated and not happy with how the game was going. Well, now the match-up we have all been waiting for and a matchup that should probably be the Stanley Cup matchup but is impossible for that happen. Anyways, Winnipeg vs Nashville for the second round and only one team can move closer to their chances to hoist Lord Stanley.