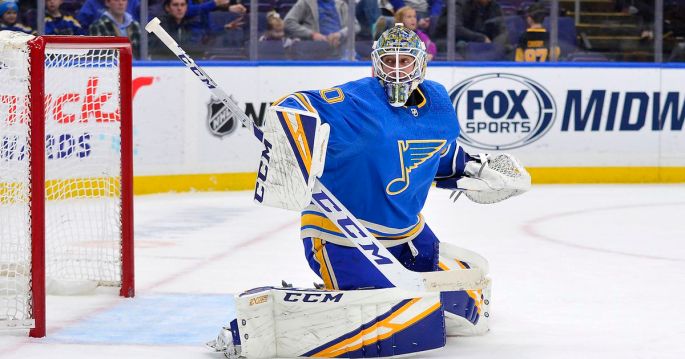 The NHL releases three stars of every week and this week it happened to consist of two “unlikely” names per say. The first star was Jordan Binnington the rookie sensation in St. Louis who has surged the St. Louis Blues to a seven-game win streak and a wild card spot. Star number three was Dylan Strome the Chicago Blackhawks center, who was sent to Chicago from Arizona for Nick Schmaltz.

The reason this is being reported is because it is awesome news for these two guys. First off Jordan Binnington was drafted in 2011 3rd round, 87th overall never made his way up the NHL ladder and from 2011-2018 until he was called up he spent all of his time (besides one year when he played in ECHL for the Kalamazoo in 2013-14) in the AHL, emerging as a starter in 2014-15 in the AHL and at 26-years-old Binnington finally got his shot in the NHL this season when the Blues needed some resurgence at the goaltending spot.

Binnington has started in 11 games this season with a record of 9-1-1, a 1.77 goals against (GAA), .929 save percentage and 2 shutouts in his time so far. In his last five games he has five wins, most notable win coming in shutout fashion vs the best team in the NHL (Tampa Bay), allowing seven goals in those five games. All the talk about Carter Hart and his resurrection of Philadelphia is over shadowing what this kid Binnington has done for the Blues.

Dylan Strome another young player who has had his fair share of difficult stretches finally gets a chance in Chicago and has been lights out since coming to Chicago. It doesn’t hurt playing the power play with Patrick Kane and some 5 on 5 time with Kane, Jonathan Toews and Alex Debrincat, nevertheless Strome has been a major reason the Blackhawks are back in playoff contention. Since his arrival to Chicago Strome has recorded 11 goals and 19 assists, 30 points in 32 games. During his 32 games in Chicago the longest Strome has gone without a point has been three-games so far. The kid has been on fire and earned himself third star of the week (this week) recording 2 goals and 5 assists in three games.

Strome was drafted in 2015 1st round 3rd overall by the Coyotes after playing the 2015-16 season in the OHL recording 111 points in 56 games (37G, 74A) Strome headed to the NHL in 2016-17 where he only played seven games. In 2017-18 he played 50 games in the AHL and 21 games in the NHL recording 9 points that year. At the start of this season the Coyotes expected him to be a number two, borderline number three center, Strome played 20 games with Arizona recording 6 points and -10 rating before being shipped out to Chicago. The Coyotes essentially gave up on Strome after just 48 games. They did receive Nick Schmaltz in return but it was still a very questionable decision by Arizona and Strome is surely making them regret it now as he continues to roll in Chicago.